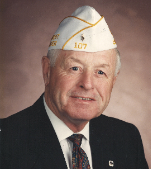 The Department of Iowa regrets to announce the death of Past Department Commander Ed McGivern. Commander McGivern passed away Saturday, September 28, 2019. Funeral Mass will be at 10 a.m., Wednesday, October 2, 2019 at Immaculate Conception Catholic Church, 405 4th Avenue, Van Horne. Interment will be held at Holy Cross Cemetery with graveside military rites by the Merkel-Bockholt American Legion Post #107 of Keystone and Iowa Military Honors. Visitation will be held from 4:00 until 7:00 p.m., Tuesday, October 1 at the church. A memorial fund has been established. Ed served in the US Army during Korea. He was a life member of Post #107 in Keystone, He served The American Legion as Third District Commander and Department Vice-Commander and was elected Department Commander at the 1991 Department Convention. His obituary is available through Phillips Funeral Homes.