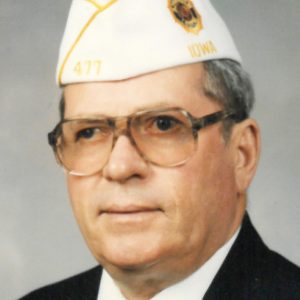 The Department of Iowa regrets to announce the death of Past Department Commander Bill Wilsbacher.

Commander Wilsbacher passed away Sunday, April 28, 2019. A Mass of Christian Burial will be 10:30 Friday May 3, 2019 at St. Joseph Catholic Church, Ellendale. Burial with military honors will follow at St. Joseph Cemetery, Ellendale. Visitation will be 4 to 8 p.m. Thursday at Meyer Brothers Colonial Chapel with the family present 6 to 8 p.m. There will be a Vigil Service at 7 p.m. followed by a Chaplet of Divine Mercy. The Chapel is located at 3220 Stone Park Blvd., Sioux City. The church address is 22533 Co. Rd. K22, Merrill.

Bill was elected Department Commander at the 1992 Department Convention and gave a year of his life serving in that office.